Me vs The Boat...Part 5 - What sailing *should* look like

Wondering how we got here? (Me too!)

So we've made it this far. I feel a bit like I'm drawing out the Twilight series from four shitty books into five atrocious movies.  But that's the world we live in, so off we go.

Our next sailing adventure came from my husband's uncle, who had recently purchased and was fixing up an 85 foot sailboat. He'd heard about our new acquisition, and probably about our dismal attempts to sail it, and invited us out for a few days of sailing/learning. 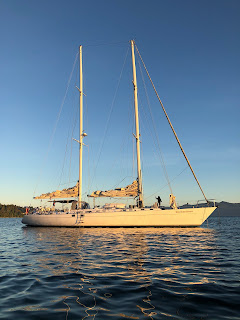 To say this guy was a seasoned sailor is a salty understatement. He's one of those people that look at the water and can tell you how fast the wind is blowing, where it's coming from, and how many seals are currently mating in the general vicinity. He's sailed all over the world, and you can tell he knows his shit. I do not. And this has never been more apparent.

The boat itself was staggering. You could fit 3 of our boats on it, and probably still have room for a dinghy (or a few of those aforementioned seals?). It was massive.

We went out a couple of times and learned, then promptly forgot, a bunch of really good sailing information. One thing I've discovered about myself is that when I get into a situation where someone is giving me a lot of really great information, but I also don't really understand what's going on, my brain shuts down after picking up 1-3 specific items. Everything else is gone.

With this in mind I can tell you the following: 1) Don't fall off the boat 2) There is basically no end to the number of ways in which you can fall or be thrown off the deck of a boat, and 3) when you fall out of the boat, don't try to climb into the life ring, just flip it over your head and ideally get pulled back onto the boat. Easy. 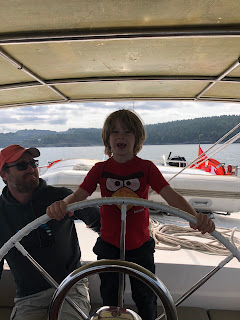 I actually did pick up a few more things, but it was easily only a tenth of the information given to us.  There were a lot of boat terms thrown around that I'm pretty sure he thought we knew, but I clearly did not, and at one point we took a video of his uncle splicing a rope, because there was a zero chance we would every remember how to do it on our own. 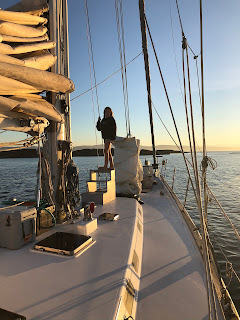 Overall, it was a spectacular experience on a beautiful boat, and I'm sure we got at least a little smarter. Oh, and I did learn that even on a big boat I can innately tell when we hit 15 degrees heeled over. His uncle didn't believe me and had to check....but I knew...it may be the only thing I've ever really known with any certainty on a boat. 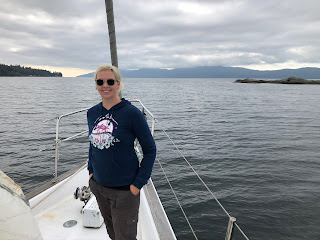 Maybe it was time for us to try again on our own boat, with all of this newfound knowledge. I'd say how bad could it be, but then I've learned that tempting fate on a sailboat is rarely a good idea.

Join me next time for what I think will probably be the last sailing installment for the season...

Posted by Jamie vs Everything at 14:36