Me vs The Boat...Part 1 of probably a few

It’s never really a good idea to pick up a new hobby because YouTubers with no kids and disposable income did it successfully this one time. Well, in some cases maybe; you want to take up crochet and need a tutorial? Have at it. Have a channel where you open up and play with toys? Sure. (This for some reason actually happens, click here to read about it)

But that’s not what we did. We bought a sailboat. A cheap sailboat, so that if it goes up in flames on the water, we'd just let it burn. Like most of our toys it’s only slightly newer than I am, but that’s ok….she still floats. And
this new adventure came with only one significant problem: We didn’t know how to sail.

Again, if you’re picking up crochet, having zero reportable skill isn’t really an issue. If you’re absolute shit at it, the worst that happens is your dish cloth looks like it was done by a spider on hallucinogens. If you’re not good at sailing, however, you can sink. Or crash. Or capsize. Or, if you’re really talented, maybe you crash, capsize, and then eventually sink. In flames. The possibilities really are endless.

What I really wanted was the tropical paradise that can come with sailing. The idea of living on a well-equipped catamaran in the Bahamas sounds magical. More importantly not dealing with our quickly approaching winter sounds even more magical. (It's possible that I’m actually a 75 yr old snowbird, and maybe I should look into a trailer in Arizona? Fewer sinkings.)  And yes, I know that it isn’t all suntans and happiness, but I’m living vicariously through the internet. Let me be.

But even I was able to rise above the over-edited YouTube bliss enough to realize that jumping from my landlocked home, to a full time on-camera sailing career was unlikely, and frankly not something I would even really want. But the allure of sailing still held.

I had really advocated for this whole insanity about a year ago, but also recognized the general futility of the whole thing and more or less moved on. Meanwhile, in the very quiet background, my husband plotted. Then, this spring, he started sending me posting of small sailboats for sale. No lead up, just "here's a boat". Apparently I wasn’t the only one who had lost some part of my mind.

The first boat we really liked on paper. After a few back and forth emails with the seller, I asked about the condition of the interior, as he'd posted no pictures of the inside and made no mention of any issues. He said it had "a little water on the inside, like most boats do". Um, ok....please define "a little water". Approximately 30 gallons over the last few months. Now, I'm not an expert, but I feel like the water should be primarily on the outside of the boat. What you have is a floating bath tub.

Also, your boat is sinking.

Then we went to see one boat that I’m not sure had seen the water in a decade. Maybe once upon a time, but not anymore. It had a hole in the hull that the seller told me probably wouldn’t be an issue because it was probably above the water line.…and that wasn’t even the worst problem it had. The drop keel had bubbles of rust that burst if you touched them, and had completely seized. I don't think a team of elephants could have pulled it down into a usable position. We noped out of there pretty quickly.

The next closest boat was a 900 km/10 hr drive, but thankfully ended in a perfectly good condition 1983 Macgregor 25 ft sailboat with no motor, because that had fallen into the lake the day before. Happily this saved us a fair amount of cash, but meant another trip to another town to pick up a used motor that was only a few years newer than the boat.  This was then followed by a few more days of work taking the motor apart to try to figure out why it wouldn’t start. Turns out that outboard motors don’t like their telltale tubes blocked by large dead insects. Who knew?

But now we had a boat and a working motor. Step one complete! 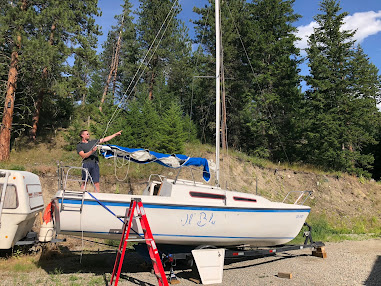 We were ready to go sailing.

Although the term "sailing" could probably easily be replaced by "doing an absolutely shit job of navigating our boat off the dock".

Stay tuned for part 2 of this sailing saga, where we revisit our heroes at the beginning of the 'evolution into pro sailors' montage.

Posted by Jamie vs Everything at 09:32