***I'm just going to apologize right now for the formatting errors around the pictures. I can't explain what is going on, why it's happening, or how to fix it, so know that I know, and it's not just shitty editing on my part. Sorry.

If you haven't already done so, please feel free to check out Part 1 here

When we last saw our heroes, they were staring off into the sunset from the deck of their boat...which was still parked in the driveway, because that's as far as we'd gotten. But we had a boat!

And it was at about this moment that I was hit by an overwhelming tidal wave of anxiety. Somehow, it hadn’t really occurred to me until now that the “sailing experience” my husband claimed to have came from a trip when he was a pre-teen and reading books about how to sail. And my own experience made him look like a salt-weathered captain chasing a mythical white whale, as I’d only ever been on a sailboat twice, for a grand total of about 6 hours if I generously combined the two. What kind of incredible error in judgement had we made?

But before I really get into the actual sailing bit, I feel like I need to address a bizarre phenomenon that I encountered during our initial boat acquisition process. Whenever I talked to people about buying a boat, I would get one of two reactions: Wow, that sounds amazing, you’ll have so much fun! OR Hmm, you know sailing is expensive and totally dangerous.  You’ll probably flip your boat, and die in the icy cold waters of I-told-you-so. And by the way, have you watched *Adrift (*or some other sailing disaster movie)? You should watch it...you'll never want to sail again!  (<--- What the actual fuck?)

Unfailingly, it was one of these two reactions.  And in answer to the question of whether or not I’ve pulled out the popcorn to watch a movie where people make incredible, and frequently avoidable, errors in judgement while not respecting the ocean’s power: No. No I have not.

It's like asking someone who's about to take their first flight if they've recently watched Alive, and do they intend to become a cannibal if the opportunity presents itself?  Or maybe we can ask if the person climbing onto the bus has had the pleasure of watching Speed? Are you aware that by getting onto a bus you run the risk that terrorists have rigged a bomb onto it that requires a minimum velocity to avoid exploding?!? You didn't? Well, you should be more careful!

But I don't do that, because that is a fucked up thing to do.

So back to sitting on dry land in a boat.

Because our maiden voyage was delayed by a week due to the motor's stubborn refusal to work, I decided to take some time to clean and repaint the inside of the boat. As much as 70's-chic faux wood speaks to me, I wanted to lighten things up.

For anyone that hasn't painted in a confined space, it sucks. So, so hard. Our boat, while it technically has a below deck area, does not have a below deck area I can stand up in. So I spent hours contorted into unhealthy positions to make brown "wood" a nice blue tinted white. It's much brighter and happy inside, although I'm still stuck with the plaid cushions, because frankly I'm cheap, and they are very expensive to replace. 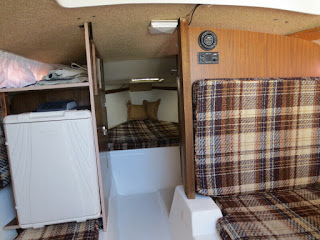 Eventually, the motor ran, the paint dried, my anxiety was high, I was regularly having nightmares about crashing into things..... we were ready to go.

We thought we were smart and scoped out our first launching ramp ahead of time. In theory, this was smart, but we'd neglected to account for the fact that the ramp was at the far end of the lake and the wind usually blew directly into it. If we'd known what we were doing (and we did not), we would have recognized that launching directly upwind was not ideal. Instead, we did not recognize this until we were past the point where it could be helped.

We got the mast stepped and the boat in the water with what I would consider to be minimal embarrassment.  As is the case at most launching ramps we had an audience, and my husband, who is extremely adept at backing up trailers, made it look like (at least initially) we knew what we were doing (again, this was not true at all).  The boat was in the water and floating. Step one, check!

We started the motor and got ready to shove off. We could do this! And then the motor died. We can't do this!  A minute later we had it going again after I pointed out to my husband that no only was he extremely good at backing up trailers, but he was also very good at cutting off the flow of gas to the motor while sitting on the main fuel line. We could do this again!

Now, I'm not really sure how to convey to you as the reader how poorly this next part went. I wish I had it on video so one day I could show it to people as an example of what not to do, but I'm also pretty sure that if I searched "idiots on a boat" on YouTube I could probably find a clip from one of the beach bound audience members. A friend of mine said that she wished there was a "new driver" sign for boats that could could be put up when learning to sail.....just give us some space and don't make too much fun of us....we're trying really hard here. I think this is a great idea. Basically, please don't assume that I have any real skills yet, I'm just trying not to hit things.

Which is about all I can say we really succeeded at that day. We didn't hit anything, and it's a fucking miracle we didn't.  It's also about the only thing we can really claim went the way it was supposed to that day. We didn't cause any property damage. Go team.

After pushing off the dock, we careened out into the narrow channel lined with boats that were much more expensive than ours on one side, and a dock that also looked pretty pricey on the other. We got about 10 feet from the dock and realized that we had basically no control at all. The motor, which was (and still is) finicky at best, would occasionally just shut off, leaving us adrift. However, even when it was on, we had very little steering capability because as we learned very quickly, the mechanism to lock the motor down in the water was gone? broken? somewhere? Honestly it didn't matter....as soon as we tried to reverse, the motor would kick out of the water and we couldn't steer out into the lake if our lives depended on it.

I spent the next 10 minutes (eternity) standing on the bow screaming to either go forward to avoid hitting the boat near our stern, or to go backwards to avoid crashing into the very expensive looking private dock at our bow. This was all while getting hit broadside by the wind, because the only thing we'd managed to successfully do was get ourselves positioned perpendicular to the dock, which to be fair, was never our goal. Then we just ping ponged back and forth for a while, trying to get pointed in the right direction, all while attracting an audience, which is always very helpful in a stressful situation.

My 7 year old was huddled below deck in the fetal position with a bag of chips just waiting for it all to be over. I'm shocked we ever got him back on the boat honestly.

After a lot of yelling, divorce talks, and a briefly considered plan to jump ship, swim to shore and just walk away, I managed to hop back onto the dock and pull the boat back in manually. And yes, for reference, that's how far we made it on day one: I could jump back onto the dock from the deck of the boat.

With some help from a kind stranger who didn't even make too much fun of us, we figured out why the motor didn't lock down (a problem that was humiliatingly easy to fix once we read the instruction manual) and got the boat back on the trailer. I was more or less ready to sell the boat by the end of the day.

On the way home I unilaterally decided that we were not stepping foot on our boat again without taking lessons. But that in itself is a saga best left for another day.

See you all for Part 3 where we learn about sailing lessons and how bad I really am at spatial orientation.

Posted by Jamie vs Everything at 11:04