Me vs Cow Tracking

I recently fell off a horse for the first time. Very, very slowly.

How does this have anything to do with cows? Let’s go back a few hours.

To help out a friend (and frankly to live out my fantasy of being a cowgirl) I agreed to go along with her on horseback to round up 19 cows and calves spread out somewhere on 115 acres of forested land.

To say I was excited would be understating it a bit. I was ready. I was so ready. I was going to ride a horse and look majestic doing it. Unfortunately I didn’t have cowboy boots or a cowboy hat, so I was more like an idiot riding a horse in sneakers and a baseball cap, but fuck it, I was on a horse.

Now, I’m not a terrible rider. I’m not great, but I’ve ridden a reasonable number of times since I was little and managed to stay on. It’s basically point a horse in the direction you want to go, say yee-haw, and let the horse pick the path of least resistance.

Or so the theory goes.

It took us a while to track down the cows, but the morning was beautiful, the scenery was awesome, and the riding was easy. Nice open meadows and hillsides with million dollar views.

Cows, however, literally shit on million dollar views. Lots of cow shit, but not an animal in sight. The cows only liked to sit and be cows in the densest, most terrible, prickly brush available to them.

What you need to understand about cows is that cows go where they want to. Horses don’t. Cows just crash through everything in front of them, knocking it over, with no thought to the poor people on horses getting smacked in the face by Every. Single. low-hanging branch. My hands were raw from trying to grab the branches at speed to keep them from stabbing me in the eye.

Once we finally found the steak on legs, I realized that trying to wrangle them was an entirely different game, and I was bad at it. My friend told me to circle around so they didn’t split up as we rounded them back down the mountain to the open area. Right. Like I seriously had that ability tucked away somewhere.  Riding through the bush hunting cows is apparently not quite the same as a tourist trail ride. 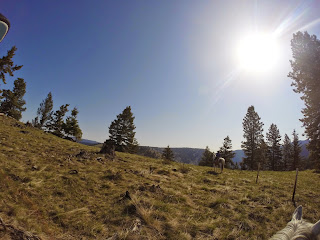 Even assuming my horse wasn’t being a stubborn ass, which he was, the brush was really thick.  There were so many fallen trees, that I spent the better part of 15 minutes in some kind of forested infinity loop with impassable tree configurations.

To make matters worse, the horse and I were having a difference of opinion about who the brains of the operation was. I couldn’t get him to take more than 2 steps at a time in the direction I wanted. He would, however, happily prance back in the opposite direction. Ass hole.

The only way to get out was to pick our way over the trees I was trying desperately to get around. I’d seen the other horse do it. No big deal. Well, apparently my horse wasn’t into that.  Out of nowhere he walks up to the tree and jumped over it.

I was not expecting that. At all. I crotched myself on the saddle horn.

But I stayed on.

It was now a challenge for my horse. He would randomly jump logs or step over them. I could never tell which was coming, so I got used to bracing myself on every approach, no matter the log size.  I stayed on.

At one point I thought I’d be smart and get off the horse and walk him over the log because it was huge and he wouldn’t go over it with me on him.  I went over and  turned around just in time to leap out of the way of him JUMPING over the fucking thing anyway. Horse hooves are really big when they are flying at your face.

His highness also took to running down hill. Now for those of you who’ve never been on a horse, you need to understand that going downhill sucks. You mostly lean back in the saddle and hold on while the horse plods down and you hope he’s got decent footing. My horse liked to trot down. SO much more fun that way.

Eventually, and no thanks to me, we managed to get all the cows on the right side of the fence, get them out of the forest of fallen trees, and push them onto the path heading home.

Then path grew narrow. I was following behind my friend. Her and her horse ducked under some saplings that had arched over the pathway. I followed. Regrettably my horse opted to go under them at a point that didn’t allow enough room for me, the rider, to go under them with him.

As I began to realize that I was going to get swept off the horse as we went under the trees, I panicked and grabbed onto them like a drowning person in a river. The horse kept going with my feet still attached to the stirrups.

Luckily for me, my horse was an eater, and a few steps past the arch he stopped for a snack.  This left my upper half hanging from the branches while my feet stayed with the horse. Think “planking” but without intent.

I wish I had a picture of this because I’m sure it looked very entertaining.

I hung there for a minute wondering how the fuck I was going to save this situation. Oh, and I forgot to mention that I was hanging over a swampy mud pit. Because of course I was.

At this point my friend turned around and started hollering at me to pull the horse back towards me (I still had one reign in hand). This would have worked IF I’d still been at my original starting height.

The saplings were not doing their part to support my weight, so I was sinking. I was now a human ramp with my feet in the air, attached to the saddle, and my head getting steadily closer to the mud.

Once my friend realized that I wasn’t going to die, and the horse wasn’t taking off with me dragging along behind it by the ankles, she told me that I’d just have to kick out of the stirrups and hit the deck. Well, I imagine that is what she was trying to say, it was hard to tell through the laughing.

Long story short, my ride back home was muddier and wetter than I had imagined it would be.

At the end of it all, we managed to get all the cows home and into the pen, and it was an amazing day. And while I spent at least some of the ride cursing the stubbornness of my horse, if I’m honest, he was probably thinking similar things about the moron on his back. Despite all the cuts, bruises, and near misses, I got to go full-on City Slicker, and that was awesome.

And then I noticed something in the cow pen. It looked like a cow standing up on its hind legs mounting another cow.

My friend looked at me looking confused and told me it was called “bulling”. The females will act like bulls, mounting other females when they are in heat. It’s one of the ways you know they are ready to meet the baby-daddy to get it on for the next round of calves.


Now I want to go find a highly conservative Texan and say “Excuse me sir, but I thought you should know that your steak was a lesbian”.

Posted by Jamie vs Everything at 20:55