Me vs The Dog

It’s possible that I’ve lost my mind… actually, it’s fairly likely.  For reasons that are getting fuzzier as time goes on, I thought it would be a good idea to get a dog.  Millions of people have them, how bad could it be?

I’ve had a dog before.  Sort of.  It was a shitzu, and had eyes only for my mother, but he was technically our dog too. He was cute and didn’t bark.  Easy, right?
Let me tell you about how a small, easily outweighed foot cushion does not prepare you for 70 lbs of motivated dog.

We picked up JJ from the shelter to words of encouragement and promises that he was a lovely dog and would be a great addition to the family, and to be fair to the dog, he isn’t aggressive, and he does occasionally show some restraint. Some, and occasionally.

Our rationale for getting this dog was more or less that I wanted something to warn me about wild animals in the vicinity, and to make me feel irrationally better about walking in the dark while simultaneously lessening my risk of getting eaten by cougars.  He does this, and that’s good. We also opted for an older dog vs a puppy because I didn’t want to deal with house training and major discipline issues. He is less good at this.

First, this dog begs for food with a tenacity I’ve only seen in the seagull population of Granville Island in Vancouver. He sits there and stares at you…pretty much at eye level because he’s surprisingly tall…and just stares. He doesn’t blink. You can feel him breathing on you. The one thing that he has going for him is that he doesn’t try to grab the food off your plate or out of your hands, so credit where it’s due, but  that said, the amount of dog breath he desperately exhales onto your food is enough to make it unpalatable.

He’s also less than enjoyable to walk right now.  Partly because it’s -17 outside, and walking is unpleasant with or without a dog, but also because he brings the added pleasure of an excited, heavily muscled dog pulling you down the icy driveway. I need a harness and a sled. He could pull firewood for me. Basically it’s something of a miracle that I haven’t ended up face down in a snow drift yet.

I also live in fear of him running free around the house. Despite supposedly being house trained, he doesn’t always take it outside. I have very little tolerance for this. If I didn’t mind pee everywhere, I would have gotten the aforementioned puppy. They are cute in part so that you don’t kill them for defiling your carpet. I get that heading outside in the cold every time you need to take a leak is not awesome, but it’s a requirement. If it makes you feel better, I don’t much like taking you out there either. Please have the decency to be quick about it.

He’s not. Apparently it is impossible to pee without first walking around for 10 minutes, temperature be damned.

On the up side, he hasn’t tried to consume the children, despite the fact that the youngest is often covered in peanut butter, and to date he’s shown only moderate interest in the cat. For the most part they ignore each other. In those instances when they are caught together, or the cat feels irrationally cornered about the dog’s existence,  the cat puts on a display that is more puffy-cat-showing-he’s-big, than any actual aggression. Mostly, the cat plays with the dog’s constantly wagging tail. The dog, on the other hand, just wants to know what the strange little white thing with sharp bits is.

I’m holding out reasonable hope that the dog will settle into his new home quickly and eventually will even allow me to leave the room without him. He’s currently my shadow. I cannot go to the bathroom without my escort, I cannot make food without him offering up himself as my food taster, and God forbid I go into the garage without him! It’s probably good that he’s attached rather than indifferent, but it’s a huge change for us, and I now have a 1 yr old, 5 yr old, cat, and dog competing for my attention every waking moment of the day. 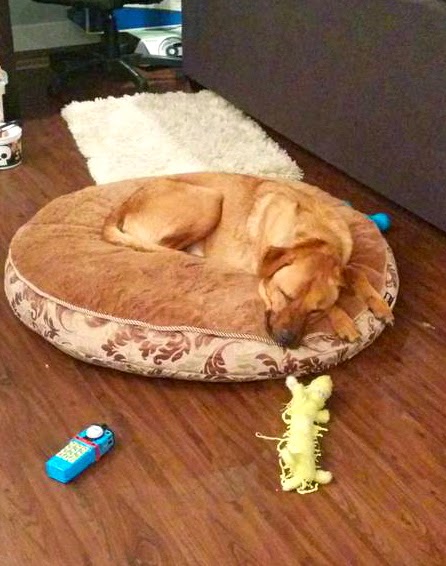