In November of 2013, Husband and I made the (decidedly insane) decision to relocate our family from the urban outskirts of Vancouver, BC, to a small town in the interior of BC. This move meant leaving behind family, friends, my job, reliable water, and garbage take-away service. I actually have to go to the dump! (More accurately my husband goes to the dump)

To further the insanity, we have relocated to the outskirts of town, and built a house on acreage. This is both exciting and extremely stressful, and something we never thought we would have the opportunity to do. In hindsight, there are reasons I won't do this again...see my post about well water.

It’s been a bit of a change, and I both need and want to share the adventures.

My cast of characters: 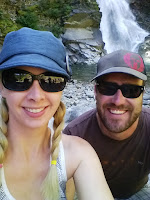 Me – I’m a sometimes-stay-at-home-sometimes-go-to-work mom of two, with a strong need for caffeine to help me survive the day. Sadly, however, don’t like coffee. I grew up in a reasonably sized city that offered all the amenities, and my mother told me that she didn’t think I would survive for long living in a small town. She reserved this opinion until recently - which is probably good - as I wasn’t sure about it myself and would not have needed a lot of convincing to stay in the city. Happily I’m still breathing, and my mental faculties have remained (mostly) intact.

Husband – His name is frequently mispronounced as Bryan, and his job brought us to the small town we now call home. He has been invaluable to my ongoing survival, and I think he’s pretty cute. 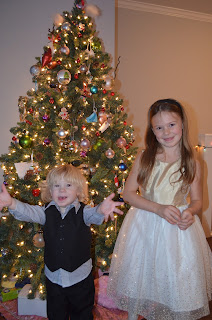 My daughter - She is too smart by half, and should probably become a contract negotiator one day. I have never seen anyone bargain so profitably in the face utter defeat. She's surprisingly helpful and will do laundry for fun....the kid version of laundry, but still.

My son - While very cute, he likes to hit things with other things, like the cats with toilet paper tubes, or with cooking implements, or with a handful of tampons he’s found while rummaging in my bathroom cupboard. His little blonde curls get him out of pretty much any trouble he gets into. And he LOVES Power Rangers almost as much as I hate it. 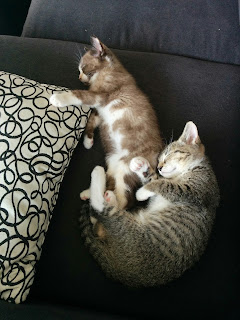 Maverick and Belle - We managed to luck out with two of the nicest cats I've owned. They are brother and sister and are rarely apart. They have their drawbacks, mind you. Belle is a binge eater that tends to purge after a good meal. Yes, my cat is apparently bulimic. Maverick, the tabby, is just huge. You can't tell from the picture, but he doesn't really fit a lap anymore. 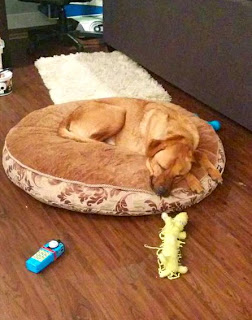 We also have a dog named JJ. He's brown. That's really all I know. He was a rescue from California and didn't like the snow much when he first came to live with us. He's adapted and now bounds through it like a rabbit. He's a great dog, and I think we pretty much won the random dog lotto.

I hope you enjoy my adventures in transitioning to small town life, surviving motherhood, and battling wildlife I didn’t expect to have to deal with.

….I promise I will try to be funny.