Me vs Cindy and the Bookfair

Just before Christmas, my daughter’s school had a brilliant idea and held a used book fair for the kids. Families were able to donate books (Yay, less stuff in my house!), and then set up just like a regular book fair, but prices were dirt-cheap and kids could go buy whatever they wanted for less than two dollars.

In an even more inspired move, kids were able to purchase books for their family members, and the teachers would help them wrap the books so the kids could give them as Christmas presents. (I’m truly impressed with our school and the creativity of the PAC we have!)

My impatient 6 year old couldn’t wait until Christmas to give us our books, so we got to unwrap them that afternoon. It was very cute.

She got her brother a book about cars, because he loves cars.

She got her dad book 4 of a sci-fi series, because he loves outer space.

She got me a book about a 15 year old girl who didn’t want to go to prom. She picked this particular book because it had a picture of shoes on the cover, and I love shoes.

This was adorable, and so I read it….plus she checked in daily to verify my progress.

And so, in order to justify the time I lost to this literary massacre, here is my book report:
This is possibly the worst book I’ve read in the last 20 years. Wait no, I read Twilight.  But it was still bad. Really bad.

My mom gives me terrible books to read just so she can talk to me about how terrible the books were, and this was worse than any of those. I should pass this one on to her next, as apparently we’ve formed some kind of informal book club that chooses only shitty books on purpose.

The book is called Cindy Ella. Yes, it’s a really terrible modern play on Cinderella, complete with bitchy step sisters and a step mother who loves nothing more than binge shopping at high-end stores, and can’t understand why Cindy doesn’t. It’s about as shallow a book as you imagine it would be.

Our heroine, Cindy, makes herself feel better by watching 80’s cult classics, like 16 Candles….very original….and eating ice cream. She also writes a hugely unpopular letter to the editor of her school paper about how much prom sucks, in a school/city where going to prom is apparently more popular and important than the moon landing.

Excuse me a moment, I have to go vomit.

The writing itself was dismal. I realize the 40+ year old writer was trying to channel a 15 year old girl, and hasn’t been that age for quite some time, but sweet lord it was a painful, awkward read.

The one thing I will say for it is that at least in the end the main character didn’t bend her morals or change her opinions just for the sake of a cute boy. Instead he didn’t go to the prom with her…..so that’s something, right?

I suppose in the end the whole experience could have been worse….I heard rumors that one kid unknowingly bought their unsuspecting parent a copy of 50 Shades Of Grey.

Which begs the question….who donates 50 Shades of Grey to an elementary school book fair???
Posted by Jamie vs Everything at 06:50 2 comments:

Me vs Me Last Year

Since I've now celebrated a full year doing this whole writing thing, it seems like a good idea to look back and see what posts have been the most popular.

While I realize most people do this at either the end of the year, or immediately at the beginning of the next, I am running a bit late due to sick kids, time management issues, and basic procrastination.

And so here are the posts that have been the most popular throughout 2015...

Me vs My Gender-Neutral Name

Me vs Crossing the Border

Me vs The Superbowl

Me vs The Never Ending Story


Thanks again for reading, and for the support in this adventure. It's been fun, and I hope to continue to find things entertaining enough to write about. :-)
Jamie
Posted by Jamie vs Everything at 13:18 No comments:

Me vs Dinosaur Beans

Yesterday night, in a last ditch effort to save my 2 year old son from scurvy, I made up a song to get him to eat a vegetable. Specifically green beans.

By some act of God, this inane song actually worked. I can't believe it did, but it did.  In fact it worked so well that he ate two helpings of beans, which was basically a new parenting high for me.
The drawback was that I had to sing this idiotic song for every. single. bean.

By this point his sister decided that this was the most amusing thing she'd seen all day, and all but refused to eat her food until I sang the song for her too. This meant 20+ renditions of this irritating musical to get through a meal.

The resulting opera took most of the night, and suffice to say my dinosaur beans were a bit cold by the time I was allowed to take a moment to
consume them between performances.

But he ate vegetables. I consider it a win.

Posted by Jamie vs Everything at 13:05 No comments:

Me vs Shipping is Stupid

Congratulations! We made it through the Christmas season and into another year. Well done everyone!

One of the realities I face leading up to this magical time of year (besides weight gain) is that I don't live near a mall or any reasonable shopping venue. This means I have to be organized (gag) and plan well enough ahead to get presents ordered and shipped to my mecca of wintery wilderness. Challenge accepted.


What's this? A package arrived for me. I don't remember ordering anything this big.... 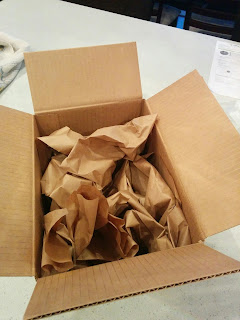 Lots of wrapping. Maybe it's fragile. 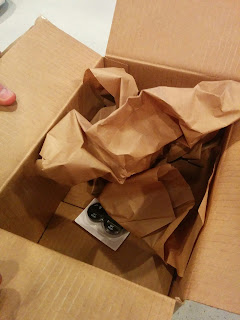 What the everloving fuck? Batteries!? Some unfathomably stupid person looked at this tiny set of batteries and thought yeah, lets totally waste this box on something that could go in an envelope, and we should charge the customer 32 times what is reasonable to send it to them. Yeah, do that. 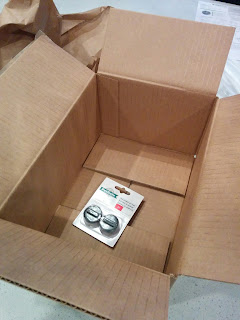 Posted by Jamie vs Everything at 17:53 No comments: