Me vs The Boat...Part 4 - Maybe this time nothing will go wrong?

TL;DR - We had a boat. We'd taken a lesson. We still didn't know shit.

I had hoped that following an actual lesson, the nightmares about crashing into other boats, having the keel fall off, or being capsized because I couldn't throw my weight around properly would end after some training, but if anything I was even more convinced that we'd made a horrible error. It seemed that everyone I talked to felt that we would end up on the bottom of the lake before we made it to the other side.

I should also say at this point that my husband in no way agreed with me on any of this. His take on the lesson had been all rose-coloured glasses and rainbows. He was still blissfully unaware of the dangers I was 100% sure were waiting for us. But we still hadn't really had our maiden voyage (unless you counted being 10 feet off the dock, which apparently he didn't) so I grudgingly accepted that we needed to try again.

This time, at least, we appeared to have learned a little from our previous attempt and tried a different launch ramp that wasn't facing directly into the wind. Progress? This ramp had an easier overall approach, and a place to park and set up the boat that was much more accessible than the last place. But while there were fewer spectators, we did have a some people come out to watch us set up (why though?), and at least one woman took pictures of us and said it was nice to see more sailboats on the lake. I don't think she realized what a complete hazard to navigation we actually were.

Like the time before, we got into the water fairly smoothly, and because no one sat on the fuel line, the motor worked (at least as well as it ever does). The weather behaved itself, and unlike every other sailor out there, I was ecstatic that there was no more than a breath of wind.

With a bit of effort and surprisingly little swearing, we motored out to the middle of the lake and prepared to raise the sails for the first time. We were entering new territory, which historically hadn't gone well for us on the boat thus far, but the sails went up smoothly, we were heading downwind and.... HOLY SHIT WE WERE SAILING! 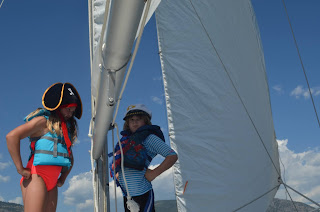 The kids still complained about how slow we were compared to the grandparent's power boat, but I was floored as we watched the speedometer climb up to 3.5 knots. And if I was (grudgingly) honest, our big boat was much more forgiving than the tiny nightmare that we'd had out lesson on. I was feeling good. I was feeling relaxed. I was feeling bloody hot...it was 38 degrees outside!
To combat the heat we furled the sails and jumped in the lake. This part the kids really liked. We even had the foresight to make sure at least one adult was on board at all times. We may not have been good at the finer points of sailing, but I was not going to let us be those people who's entire group jumped off the boat and then watched the boat sail away without them. Idiots. 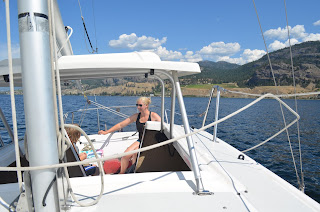 Overall, the first half of the day went beautifully. It was calm and relaxed, and basically lulled me into a false sense of security, and the mistaken belief that we were not failing miserably at this endeavor.
<--- see...lulled.
But eventually we had to go back, and going back meant beating into the wind, which had picked up considerably, and brought in some cloud cover, but had not in any way cooled off the day.
Suddenly the day wasn't quite as relaxing, and every tack heeled us over to at least 15 degrees, and we were flying down the lake at 6.5 knots, which subsequently caused me to panic. Of course I had bury that panic deep down inside to keep as quiet as I could so I didn't scare the kids, which as it turns out, was not enough, because they were below deck and refused to come out. They also didn't like being heeled over.
Now I know logically that 15 degrees heeled over is perfectly fine in a sail boat. It won't flip the boat. Academically I KNOW this.  But when it's happening it doesn't feel ok. Humans are not supposed to be tilted over by 15 degrees. It turns out I am able to handle 10 degrees, but as soon as we crest over that, I can tell. I don't even need to look. As far as I'm concerned, it absolutely feels like we will capsize and despite all the logic in the world, I panic. It makes sense....I have no real experience sailing, so I worry that I've done something critically wrong and whatever I do next will only make it worse, and I really just need it to stop. Now.  Please.
Let me give you an analogy.
I don't love flying. Turbulence makes me very uncomfortable but whenever it happens, I watch the flight attendants. They fly all the time, and have probably seen more turbulence in a week than I've experienced in my entire life. So, it's safe to say if they are casually walking the aisles serving drinks, then whatever is happening in the air is fine. Everything is fine. If it gets a little bumpy, and my husband tries to reassure me that we probably won't die, I appreciate it, but let's be honest, he flies about as much as I do. He's not a flight attendant....what does he know? And so I watch the flight attendants. Maybe they put away the drink carts. Ok, that's a bit concerning, but we're probably still fine, they just don't want to accidently cover that passenger with ginger ale. But if they start buckling in and looking worried, you know you're in trouble. Because they know. They've done this a hundred times and can tell you what's normal and what's not.
But my boat doesn't have flight attendants to tell me when things are ok and when shit's about to get real. It has me and my husband, and we're both pretty garbage at the whole thing, so as far as I can tell leaning over at 15 degrees we were pretty definitely going to die.
So there we were trying to get back up the lake in more wind than I was happy with (although in reality probably a completely reasonable amount). We got pretty good at tacking, heeling over uncomfortably, then letting out the sail enough to pop back up to where we were happy. But this made for incrementally slow progress towards where we wanted to go. By the time we made it to where we could see the dock, we were exhausted. Panic takes a lot out of a person.
And then it started to rain. Perfect. I definitely needed the threat of thunder and lighting to add to my calm.

But the dock was close. It was so close. Fuck, it was too close.

I knew from past experience on power boats, that you needed to approach the dock very slowly. I cannot emphasize this enough: VERY SLOWLY. Going into the docking process, my plan had been to stand at the bow, and when we got close enough, I would leap off and tie up, while my husband was in the back convincing our surly motor to obey him. Easy.

What actually happened was that I stood on the bow and watched in horror as we flew towards the dock at alarming speed. Our conversation went pretty much like this:

Me: We're coming in too fast. You need to slow down

Him: I can't make it go any slower. It's already as slow as it will go!

Me: GO IN REVERSE!

Him: But I don't want to go backwards.

The dock where we launched was very short (slightly shorter than the boat itself), which subsequently gave us very little room for error on the return approach. I was too far away to jump to the dock and had all but given up on the boat slowing down before we hit bottom. In the end we got very lucky that there was someone on the dock who offered to catch our line and slow us down, because otherwise we would have grounded. This whole scenario felt like it took an eternity, but likely lasted only a moment or two.

Once we were tied up, I turned around to see if anyone had jumped to the dock to tie up the stern line. Turned out that no, there was no stern line, but my husband was hanging off the stern rails, half in the water.

I learned afterwards, that in a herculean effort to stop the boat from running aground, he had leaped off the stern and onto the dock with a line, only to be pulled back off the dock and into the water by physics. He managed to grab the stern rails on his way down, and just hung there for a minute until he realized he could just stand up.

Next, join our heroes for part 5, where a benevolent uncle tries to help these idiots learn the importance of never approaching a dock faster than you are willing to hit it....

Posted by Jamie vs Everything at 20:49