Me vs The Darker Side of Garden Gnomes

My mother hates garden gnomes, and as such, I took it upon myself to decorate her house with them. The Gnomian Wars went on over a year ago, and I'm confident she still hasn't found them all.

In a pathetic attempt at retaliation, my mother tried to hide gnomes in and around our house while we were away. This was a sad repeat of what I had already done, and the lack of creativity was disappointing. Mom, you can do better. (Love you)

Putting aside the lack of originality, my mother doesn’t seem to acknowledge that gnomes don't offend me nearly as much as they offend her, so for the most part, I just left them where they lay. Sadly, the winter was not kind to their cheap production value and in most cases I ended up with lumps of broken clay paste when the snow melted.

All but one was destroyed, and the sole survivor, as I recently discovered, is also the most problematic.

At the bottom of our driveway is a large rock with our address on it. My mom hung a gnome from the sign so it could be seen by all who drove by, in what I can only assume was an effort to embarrass me? So of course I left it there in a show of defiance; an indication that her tactics were weak.

However I may have made a slight error in judgment.

I recently came across the New York Post’s article Secret Signs Your Neighbour Might Be A Swinger. Because I was bored, and have questionable taste in reading material, I clicked on it and was surprised when it claimed that garden gnomes are an indicator that swingers live there. I have a garden gnome at the front of my driveway. AND IT'S ON A FUCKING SWING!!!! 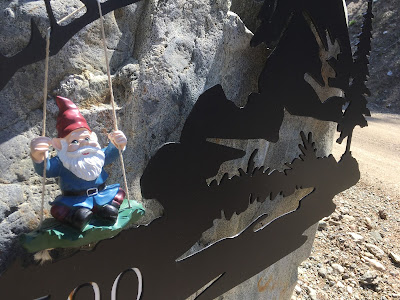 On the subject of swinging:
It’s not something that the husband and I have ever explored, but you know, you do you. I’m not saying never….if Chris Evans were to walk by dressed as Captain America and make me an offer, I would probably not say no, but overall that that seems unlikely. Primarily I think I would just be awful at the whole thing. I'm a chronic over-thinker and this would probably just kill the mood. My husband seems to have learned to tolerate me over the years, so I see no reason to trade off. But if Chris were in town......

I feel like I was justifiably concerned that my mother had singled our house out as a swinging destination in the neighbourhood. Were those really Jehovas Witnesses coming to our door, or were they couples who saw the gnome and wanted to check out the goods? Should I be relieved or insulted that no one has shown up on a Saturday night looking for a party? Would a gnome that wasn't on an actual swing be less "swingery" or do all gnomes just point the way to the nearest key party? Am I sexy enough to own a gnome?

These are questions I never needed to ask before now. Thanks mom.

But Captain America is still invited. He could even invite Thor if that would help....

Posted by Jamie vs Everything at 12:45