Me vs The Creeping Inevitability of Elves

For 7 peaceful Christmases, I've avoided Elf on the Shelf. For 7 wonderful Decembers I've managed to skip moving a little doll around in the hopes of scaring my kids into behavioural submission. For years now, I have not needed an omnipresent elf to report back to Santa in order to keep my kids in line. If they're being shitty, I just channel Alan Rickman and scream CANCEL CHRISTMAS and exit stage left. It's been very effective.

And now, that is over.

On December 6th I got a text from my kind neighbour, who drives my daughter to school on days I work. She felt I should probably be made aware that my daughter had written a letter to Santa and given it to her kid's Elf on a Shelf, so it could be delivered directly to him. She kindly offered to make up some excuse along the lines of "all the elves have already headed out for the season", but I declined. This was my life now.

I can only imagine that my 8 year old went this route to avoid past situations where I had made some excuse or another as to why we didn't have an elf and would not be getting one.  Skip the dissenting middleman and go right to Santa. Honestly, I have to applaud her tenacity and single minded determination; I can only hope that skill set can be applied to something besides forcing my hand in the future.

This is the note: 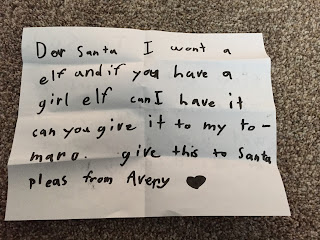 I was now left with the Sophie's Choice of letting my daughter think that Santa doesn't care enough about her to let her have an elf so that she can experience the magic of Christmas like her neighbours do, or I become tethered to this Christmas themed Chuckie doll every year for the foreseeable future.

I think it's fair at this point to ask that the makers of Elf on a Shelf kindly go eat a buffet of dicks for creating this nightmare.


Sadistic elf creationists aside, I still had a deeply irritating problem. As much as I wanted to, I couldn't simply ignore her letter and I needed a response: either yes, a fucking elf was coming, or no, Christmas is ruined.

I wanted something else, so I created option 3........ it wasn't a misery elf, but something was coming. 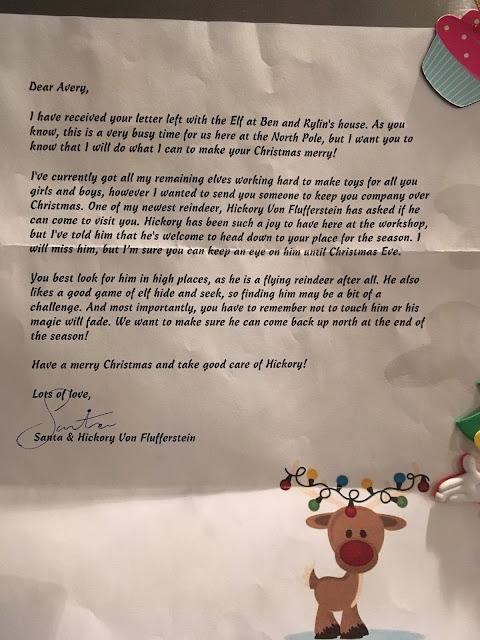 And so, Hickory Von Fluffenstein was born. More accurately, he was the cutest Christmas themed thing I could find at our dollar store, and he would do. Don't look too closely, as his antler is a bit loose.

Hickory does not feel bound by the same rules as your average elf. He moves every night but that is all, no reporting to Santa, no letters outlining behavioural improvements, and for the love of all things good, there will be no dressing up in stupid, tiny elf clothing, no fishing for sugar cubes in the toilet, and no whoring it up with Barbie. No.

Hickory sits on things and watches you, peeking out over his off centre red nose. That's all. 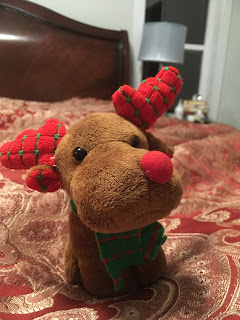 And so for the remainder of the Christmas season, Hickory's life became an alarm on my phone. He was a constant reminder that if I missed a move, my kids would know, which would in turn require urgent storytelling creativity as to why he had settled for a single spot for more than one day. He haunted me.

But we survived, and so did he. The dog didn't eat him, the cats didn't knock him over mid-day, and the sugar gliders didn't pee on him the night he sat on their cage.  The kids on the other hand, lost their everloving minds when he showed up, which was adorable. Every morning it was a hunt to find the reindeer, and true astonishment that we had our very own Christmas creature.  Hickory was....tolerable.

See you next year, old friend.
Posted by Jamie vs Everything at 20:56