As all of us know, fall is a time for obligatory pumpkin carving (despite living in a place where no one will ever come trick-or-treating), dying tree leaves (which are often confused with trees that are losing their leaves because I’m slowly killing them), and pumpkin spice everything.

It is also the time that the spiders come out in force.

I’m not naïve, I know that there are always spiders, but fall brings them into the house in numbers that rival a locust plague. The reason for this is two-fold. First, we are bringing in firewood which is home to the little fuckers. Secondly, it’s becoming ass-bitingly cold out, and they like it outside about as much as I do. It’s warmer in here, so here is where they come. One that level, I can’t really blame them. Still, I won’t suffer spiders to live inside my house.

Outside they can commune with nature all they want; inside, Mr. Spider, I expect you to die.
Unfortunately, I just can't bring myself to squish them, I require more elegant (read: hands-off) methods like a vacuum, a spider-eating cat, or a shit-ton of raid.

For years I couldn't handle any spiders. Little ones were as bad as their larger counterparts. As a child my sister and I wouldn’t go to sleep in our family's cabin bunks without my parents doing a “spider check” first. These days I would still like them to do that, but I’m not taken nearly as seriously.

Then I lived in a basement suite. Basement suites should come with a warning that you will be sharing the space, but the other tenants will not pay rent, they will creep you the fuck out, and they will bite you if given half a chance.  This suite was the first place I had lived that didn't come with a dad who would take care of the offending arachnids for me, however it wasn't until I did my first load of laundry that the scope of the problem really made itself known.

After sorting our clothes into nice little piles, I gathered up the load and tossed it into the washer. I happened to glance in and saw this hideously large spider trying to crawl out. This was a special kind of hell for me, as I had absolutely no idea how to solve this problem (see paragraph about being unable to squish). So I opted out. I slammed the washer door shut, turned on the machine, and refused to go back into the room for the next 4 hours.

I have no idea what I thought was going to happen, but I wasn't convinced that it was dead after being put through a wash cycle. It was big. For all I knew, it was a thrill seeker and would enjoy the spin cycle for the ride I imagined it would be. I was taking no chances.  As such, I took reasonable precautions and emptied the wash into the dryer using salad tongs.

There was no sign of the spider as a whole, but I picked bits of leg out of my lint trap for the next month. That was the first of many giant spiders, and frighteningly not the only one that ever went through the washing machine.

We became very adept at tracking and eliminating them, but one of our cats really upped his game when it came to spiders. He would come running from anywhere in the house if you said the word "spider", and would make short work of them.  He didn't play with them, he just ate them. Yum. Unfortunately, my other, less athletic cat also loved spiders, and would deposit them on my chest as I was sleeping. Let me tell you how unhappy it makes me to wake up to a large, dead (thank fuck) spider sitting on my blanket, frighteningly near to my face.

The cat-eats-spider method (when properly executed) worked well for your average house spider, but I was a bit concerned that the big ones would fight back, and that the cat wouldn't win. I was also convinced that they were hobo spiders, which are toxic bite. The small spiders seemed more manageable, and if the cat didn't get him, it wasn't the end of life as we know it. The big ones, however, always became the most important, terrible, and critical thing in the world as soon as you saw it.

Once you see a spider that big, it has to die. If you lose sight of it, you will rip apart your entire house to find it. You will. And you should. Otherwise, fire is really your only remaining option. I tended to go on pre-emptive strikes into the garage with my can of raid. If I got them in there, they wouldn't be able to breach the perimeter and make it inside. The most frightening part of these expeditions was that unlike the small spiders that died immediately when you raided them, the big ones didn't. It took them a surprisingly long time to succumb. Creepily long.

After Husband and I left the spider-y confines of the basement suite and bought a house, we thought we'd gotten away from the worst of the spider army. Then we decided it would be a good idea to do some landscaping in the back yard.

Lets take down these scary old stairs. What could go wrong.... 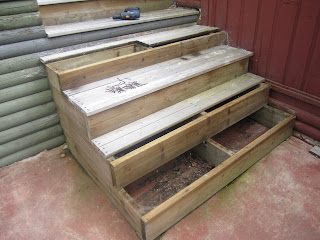 Well fuckity shit. That is a spider condominium in there (pictures really don't do the endless layers of spider filled webs justice). 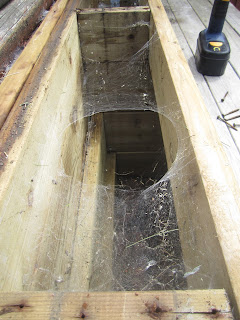 Aaaannnnd, let's unload an entire can of raid into this smorgasbord of terror. Yup, a whole can should maybe do it. 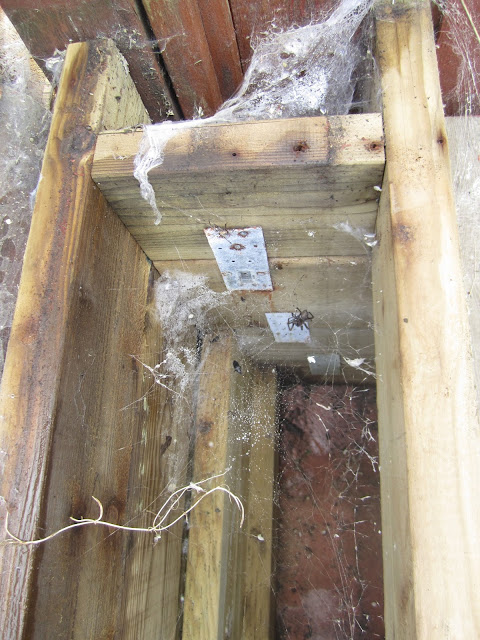 And then we watched the 25 or so giant spiders run in every direction. I lost track of most of them, so I'm hoping the raid did it's work eventually, but at least I know I got a few. Husband had to stop all work on the backyard for half a day because the fumes were so bad that he didn't want to work out there anymore. I told him it was fine....that's the smell of winning. It smells like flowers.

Basically the moral of this story is spiders are tolerable if they are outside, barely, but if they are the big ones, kill them until they are dead, location be damned.

Posted by Jamie vs Everything at 21:09