Me vs Surviving Disneyland


We’ve decided to take our kids to Disneyland this fall. It’s not the first time for us, and I’m big enough to admit that I love it. I go because it’s fun to watch the kids experience the magic, and because I love the rides. 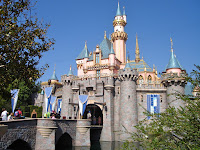 The first time I went I was probably around 6 and my sister was 4 or so (I’m guessing….I’m terrible at judging the passage of time).  It was one of the best vacations because we were totally surprised by it. For Christmas, just before the trip, our feature gift was this tiny little plane with a bunch of Disney characters in it.

I was a kid and therefore unimpressed by this weirdly underwhelming toy that I apparently had to share with my little sister.  Not ideal. Tucked into the toy, however, was a note which I’m pretty sure my mom forced me to read myself, and after stumbling through it, I fixated on the word Disneyland.

Glass shattering shrieking, the kind that only young girls can produce, followed.

The trip was great. I took particular pleasure in taking my dad on the fastest rides I could find so he could pretended to hate going on them (or at least I assume he pretended).  My mom preferred the mind-numbing rides (It’s a small world after all…..), and more or less refused to go on any of the roller coasters, saying that was something she didn't/wouldn't do.

My dad, sister, and I convinced my mom to try out the log ride. We claimed that it was a tame (read: boring) drift down a "lazy" (coma-inducing) river. We neglected to mention the waterfall drop at the end. That was fun…not sure mom shared our enthusiasm. That was fun too.

I remember getting stuck on the Jungle boat ride in front of the tribal display and listening to their drum song for the better part of an hour. I also remember somehow convincing my parents to buy us ridiculous Daisy Duck hats with huge plastic bills. Not sure how we missed the terribleness of those hats, but we were blind to it at the time. And my sister just had to have a Minnie Mouse back scratcher….because really, who doesn’t need one of those?

My sister, however, still likes to point out that at night, back in the hotel room, she was relegated to a crib and when it was time to go to bed my
parents draped a yellow blanket over the crib so she would go to sleep.

The psychological injury she claims to have sustained from this appears to have no durational limits, as we still hear about this pretty much anytime Disneyland is mentioned.  (I’m still laughing about it, she still glares at me when I do)

Husband and I decided to head to Disneyland before going ahead with the whole having kids thing. It was a great time that involved long days of riding roller coasters and staying out late (something I don't get to do a lot of now).

The only problem was that on the second to last day, Husband got food poisoning, or Norwalk, or some other terrible illness that makes you regret your entire life for about 48 hours. He was too sick to leave the motel room.

This put me in a bit of an awkward position: Stay with Husband and help him through his illness, or
go to Disneyland by myself. 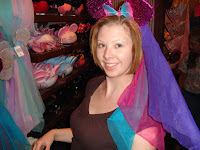 Both had drawbacks. Disneyland is NOT a place you go by yourself unless you want to look like a pedophile. It’s for couples, and families, and groups of friends. On the other hand, the thought of spending a day cloistered in a room with an audibly sick person didn't make me think happy thoughts.  And so off I went.

Disneyland by myself.  That was one of the more unusual experiences I’ve had. Everyone looks at you. Some with pity, some with curiosity, and some who look at you like you are obviously a deeply disturbed individual because why the hell would you be here alone?  It’s like a kids water park or a petting zoo….unless you actually have kids with you, it’s weird (and creepy) to be there by yourself.

On the flip side, being a single rider is fantastic. You get to lap the idiots in line waiting to sit beside someone they know when honestly on most rides it doesn’t matter. You’re in it for the ride, not the stimulating conversation with your seat-mate.  I probably screamed a little less when I didn't know the person beside me, but that's about it.

For some rides being by yourself does make a difference though. The Grizzly River Run has 8 or so seats that are placed surprisingly close to each other in a circle formation. The ride also allows for a fair amount of down time between waterfalls, which leads to uncomfortable drifting silences and awkward small talk with strangers who aren’t sure if you’re crazy or not.

By the end of my day, I got really good at powering from one ride to the next with my headphones in, and pretending that my partner was waiting with my imaginary kids while I went on a grown up ride. Definitely a strange way to spend a day at Disneyland, but probably better than being stuck in the room all day…. sorry Husband.

The most recent trip to Disneyland was with our daughter, who had just turned 3. I wasn’t sure she would really get it at that age, but she LOVED it.  I spent more time than I care to think about waiting in line to see the princesses, and she almost made Husband sick making him take her on the flying rocket ships over and over again.

The trip was amazing -  no one got sick, no one looked like a creeper, no one was stuck on a ride that got tribal chants stuck in your head for hours, and the It's a Small World ride was shut down for repairs for the duration of our visit. Perfect.

And to this day my daughter constantly asks when we are going back. Now I can finally give her a date.

Posted by Jamie vs Everything at 19:44