Me vs the Mice

Just over a year ago, our family relocated from Big Place, BC to Small Place, BC. This meant we hadn’t yet lived through a full cycle of all the seasons, and while this may seem obvious, the seasons bring more than just weather changes, they bring about changes in animal behavior as well.
What we had managed to skip last time around was early Fall in the magical forested woodlands where we lived. Again, doesn’t sound so bad. You’re wrong. It’s terrible. September in mouseland means that while it’s still nice during the day, it gets colder at night. This in turn drives all the mice to find comfy, warm places to breed their little food-lusting offspring.

As an aside, I want to point out that outside I don’t mind mice. They are reasonably cute. I just don’t want them inside, and to be fair, I generally don’t want many animals inside. I imagine I would feel unhappy about a coyote in my living room too.

The mice had been around all year. We caught the odd one under the sink and in one of the downstairs closets, but that was about it. I’d just learned to live with that. It’s amazing what you grow to tolerate. The straw that broke the camel’s back, however, started with a short vacation to visit family.  We do this often, and had never had problems before. Why would we expect anything different this time? Because fucking mice, that’s why.

We arrived home to mouse poop all over the kitchen table and counter tops. Somehow, they hadn’t found the pantry yet, but I knew fear.

Rather than eating dinner that night, I washed the kitchen in bleach. Well, not bleach exactly. In my panicked haste to avoid contracting the Hanta virus, I bought ammonia instead of bleach. Close enough. Mouse shit in your house blurs the lines a bit, and cleaner is cleaner.

My thought process went something like this: If it burns my eyes and makes breathing an unpleasant task, it must mean mouse-bourn viruses are dying. I also took the hypochondriac-based precaution of warning friends and family that if they didn’t hear from me for a few days, it probably meant the family was dying from the Hanta virus. Please send help.

I'm going to lead this next part with I can't make this up….

I was 110% done with vermin, and I was starving, having forgone dinner to clean. Kids had been fed pseudo-food and were hustled off to bed, and Husband went out on the deck to light the barbeque to finally make dinner for adults. He glanced over at the kids baby pool on the deck. Hanging out on the bottom of the pool was a very small, very dead, chipmunk, in what was fast becoming our watery chipmunk trap. This was the second floater of the season, and I was having a difficult time explaining to the kids why swimming was off the table until the pool was disinfected again. How do you tell them that their pool ends small cute furry creatures? I was 150% done by then.

Ignoring the suicidal chipmunk for the moment, we refocused on the barbecue, my hunger blocking out the untimely demise of a stupid rodent. One less to worry about, as far as I was concerned.  Husband popped open the barbecue. Inside was a rodent nest, full of little rodent collectables, poop, and hate. I missed the city that day.  Deeply.

I didn’t sleep much that night. I waited to hear the small, delightful sound of a mousetrap closing in on its victim. Creepy, yes, but revenge is sweet.

Day Two opened with the satisfying discovery that we’d caught one of the fuzzy bastards overnight.  The celebratory feeling that washed over me brought an unsettling thought to the surface: I was not nearly as horrified by the corpse of a dead mouse under my kitchen sink as I felt I should be. I actually enjoyed the fact that I'd reduced the population by one.

When did this happen? A few short months ago I would have run to Starbucks to get a large caffeinated beverage to calm my shaken nerves if such a macabre discovery had been made. The lack of Starbucks up here not withstanding, I conversely felt like celebrating over my catch, and so help me, I was tempted to stake the carcass out for fellow mice raiders to see and know fear!

My feelings of elation vanished quickly. Opening the pantry showed me that in retaliation for their fallen comrade, they had upped the ante, turning our food stores into provisions for increasing their population.

After another fun-filled day of cleaning, bleaching (ammonia-ing), throwing away half our food, and reorganizing the entire kitchen, I began to consider burning down the house as a viable anti-mouse tactic. The Mice had declared war, and made their manifesto clear, and I was answering their call to arms with my own: an arsenal  of mousetraps, cleaning products, and a cat. Vive la resistance! 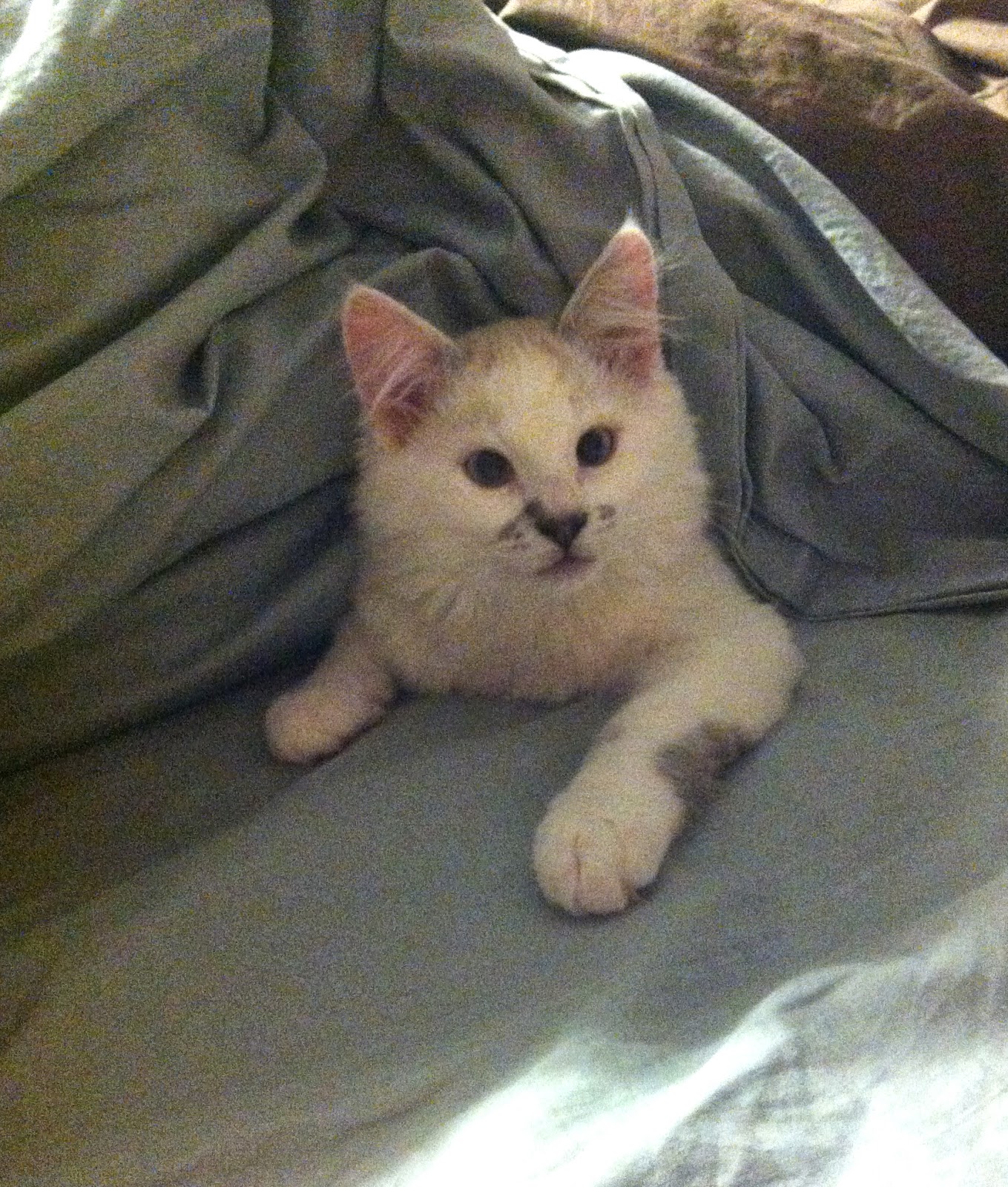 As I write this I’m looking at my kitten. He’s cute, but for the most part a useless hunter so far. He eats spiders, which is handy, though with only about a 70% success rate, but that's about it.  And though part of me wishes he was a ninja-like mouse assassin, the other part of me enjoys not finding mouse entrails on my pillow each night.

The other aspect of this drama that still weighs on my soul is that I will never know if I’ve won. There is no mouse-count that tallies up the kills against the remaining population. I can never be sure I’ve decimated their forces sufficiently, and without stemming the constant flow of new recruits, I can never be safe from their furry blitzkrieg. I still know fear.
Posted by Jamie vs Everything at 16:02