If you had told me 3 years ago that I would be moving to a small town with where cows regularly impeded my driving, and my new worst enemy are deer, I would have questioned your sanity.

And yet here we are.

Similarly, telling me that I would pay good money to go see the Dixie Chicks in concert would have resulted in derisive laughter and tasteless jokes about country music….

You can see where this is going.

By some perverse stroke of fate, earlier this month I ended up back in Vancouver and kind of drunk, attending my very first country music concert.  I was talked into this by a group of country-loving friends, and basically went along because I like them, and because it seemed like a reasonable excuse for a get-away. The concert was merely something I had to endure to participate in the rest of the weekend.

The whole thing ran pretty smoothly. Convoy to the coast, find the hotel, shopping, food, not being able to park the gigantic (and delightfully roomy!) truck in ANY FUCKING PARKADE IN VANCOUVER…..I mean, seriously, this truck didn’t fit anywhere. And while I realize Vancouver likes its tiny luxury sports cars, they should appreciate that us county folk come down from the hills from time to time, and we need a place to put our vehicle too. We didn’t even bring the pigs and goats this time!

Anyway, I digress. Eventually we parked.

In any case, by the time we finally got to Vancouver, I felt that my ride down had rendered the concert completely unnecessary, as the radio had played almost nothing but country music the entire trip. I tried to explain that to me, most country music fell into only a few categories: my girlfriend left me, my dog ran away/died, I have syphilis because my girlfriend is a tramp, and/or my guitar string broke so I had to improvise with this broom and a set of spoons.

The girls I was with thought this was hysterical, and turned up the radio, and for some reason were continually surprised that I didn’t know any of the songs. Like Earl. Why didn’t I know Earl? I mean, who doesn’t know Earl?

Me. I didn’t know Earl. Except now I do.

After going out for dinner and getting happily toasted, we made it to the venue, found our seats, and I started live tweeting the event. This alone was a novelty, as I’ve never done this before.

The concert opened, and I recognized the expected zero songs for the first half hour. My friends would glance over in my direction with a happy expectancy at the start of each new song, confidently believing that I would at least know THIS one, because EVERYONE knows THIS one.

I think by the end of the 2 hour set, I’d recognized at least the chorus of something like 5 songs. I dutifully belted out the few words that I knew, and found myself having a good time.

My favourite part of the night, however, came from watching our seat section guard/escort guy. He had a perpetual case of resting bitch face, and glared uncompromisingly at everyone who came past him. He was particularly unimpressed by the shit-faced girls that hobbled by him on the way up to their seats. At least one of them couldn’t walk on her own, and I could just feel the reality show coming.

For the better part of 15 minutes, I watched his disagreeable face glare at them. Eventually he gathered more of his bitch-faced cronies and they all stared at the offending girls as a group. For the final act, they called in the police and, as a unit, they approached the girls and asked them to leave.

The girls were mind-blowingly drunk and high as shit, and the ensuing confrontation was like watching a live version of a Real Housewives slap fight. Pure entertainment gold.

During this time I tried to act as sober as possible.

All in all, and despite not being a “country music” fan, I will say that the Dixie Chicks are incredibly talented, and I enjoyed myself much more than I expected. It helped that I had some great and very enthusiastic company to help teach me their ways. I’ll even admit to liking a few of their songs. 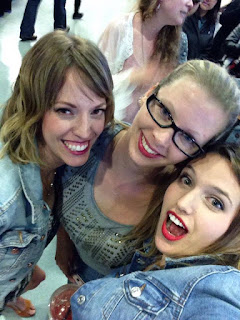 And finally, I'm confident that going forward I will even be able to recognize Earl, should it come on.  At least I should hope so, after hearing it something like 77 times throughout the weekend.

Posted by Jamie vs Everything at 22:17