It’s tick season in my neck of the woods, and over the last week I’ve pulled ticks from myself and from my youngest kid.

I brushed the first one off my shoulder while I was on the phone with a friend. I felt what I thought was s mosquito on my shoulder, and swept it off. When I brought my hand back, I had a tick stuck to my finger.

Then my very tolerant friend got to listen to my panicked ranting about lyme disease as I hunted around my kitchen on my hands and knees trying to find it again. The only thing worse than a spider that disappears in your house is a tick that pulls a similar vanishing act.

But I found it, and he became my prisoner.

I call this one Bob. 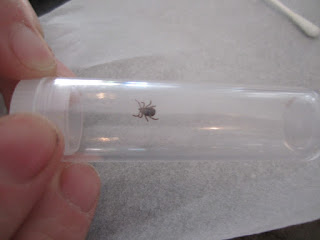 The next one came out of my 2 year old’s hair a few days later. He handled it better than I would/did.
This is Paw Patrol Tick. Guess who named him. 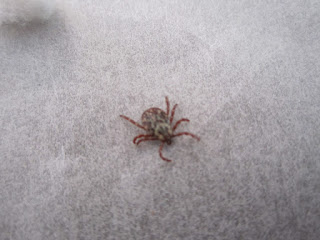 After frantically scanning every known resource online and canvassing a few knowledgeable friends, I determined that we probably weren't going to die because Bob and Paw Patrol Tick are dog ticks, and not deer ticks.

They also hadn’t had time to feed and blow up like some kind of nightmare-driven balloon animals, so we were good.

They do, however carry Rocky Mountain Spotted Fever, so if you notice either of us being sick or spotted, please drive us to a hospital.

And because I’m strange, I’ve kept them.

They’re living in my fridge in little containers. I check every day to see if they are still moving. They’re surprisingly resilient.

Since we obviously live in a place with an appallingly active tick population I wanted to see what my options were. Most websites said to stay out of grassy, bushy areas. Well, currently I live on a desolate rocky wasteland, and that hasn’t seemed to curb the issue. I literally have no grass that they would hang out on. And the day I got my tick I was sitting on my upper deck reading a book. I don’t even have a potted plant up there.

So staying out of the grass wasn’t really cutting it for me.

Our other options were deet (which I’m allergic to) and coating all of our clothes with permethrin, which for those of you who don’t know is a synthetic insecticide that acts as a neurotoxin. While considered safe to humans, I’m not sure I want to wear clothing coated in it on a regular basis.
And then there are the natural repellants. I was fairly skeptical about their efficacy, however they were a much more attractive option.
So, like any reasonable person would, I decided to investigate and see if these natural repellants worked. My plan was to use Bob and Paw Patrol Tick as test subjects, because really, how often do you get to play with refrigerated ticks?

Me and my six year old set up a cookie tray and brought out our ‘participants’. Our repellants of choice were vinegar, tea tree oil, and lemongrass oil as suggested by the internet.

I did not obtain informed consent, and I can only imagine that Bob and PPT were not willing subjects, however as I wasn’t asked if I’d like my blood sucked from my body, so I had very little sympathy.

My daughter documented our experiment with photographs and was a wonderfully macabre lab assistant, handing me one q-tip after another coated in scents to make the ticks run.

Vinegar was the clear winner, and neither Bob nor PPT liked it. You could draw little vinegar circles around them and it would take them a minute or so to break through. Lemongrass and tea tree were also somewhat effective, but not as good.

Overall I considered it a good opportunity to find if any of the suggested methods of tick repellant worked and to teach my daughter about the experimental process and the importance of testing internet theories.

Now to figure out what to do next with Bob and Paw Patrol Tick. They are still in my fridge.

Posted by Jamie vs Everything at 06:34